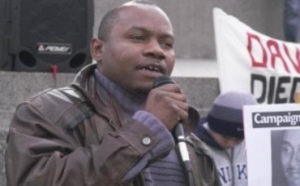 Tippa Naphtali of the United Families & Friends Campaign spoke on behalf of families all over the country when he was invited onto the Joe Aldred Show.

You can listen to the show again (or if you missed it live) for a limited period. Click here to listen to the programme   (Forward to 1.hr 11.min 24secs).

Tippa is also the founder of 4WardEver UK and a cousin of Mikey Powell who was killed in the custody of West Midlands police in September 2003.

The United Families & Friends Campaign (UFFC) is a coalition of families and friends of those that have died in the custody of police and prison officers as well as those who died in psychiatric and immigration detention. It also has members and supporters from campaign groups and advocacy organisations from across the UK.

Tippa outlined a critical historical starting point in the history of custody deaths starting with that of David Oluwale a Nigerian vagrant persecuted by police for a number of years. David was found drowned in a Leeds river after being last seen chased by police officers.

Oluwale’s case became the first recorded death in custody in the UK and has been the only time since that any police officer or other state official has been convicted and imprisoned following a death in custody.

He went on to outline why an ambitious appeal for 100,000 signatures was launched, and some of the causes and issues surrounding the 6,000 deaths between 2000 – 2011, and the support the campaign has received from figures such as US civil rights veteran, Rev Jesse Jackson in one of his recent visits to Britain.

Campaign representatives have previously said; “Our joint efforts have yielded some results. However, these have not addressed the lack of justice in outstanding cases.

“We believe that equitable dispensation justice in the UK must be done and be seen to be done if the general public are to enjoy high levels of trust and confidence in the fair administration of justice.

“The poor quality and speed of independent investigations conducted by the Independent Police Complaints Commission and an Inquest process that is seriously under resourced, subject to delay and limited in remit and is not fit for purpose. Both critically fail to protect or support the rights of victims or their families”.

Amongst the demands of UFFC are the replacement of the Independent Police Complaints Commission (IPCC) to ensure a truly independent body. That deaths in psychiatric detention must be subject to a system of properly funded investigation that is completely independent of the Health Service and that officers and officials should never be allowed to collude over their evidence and statements of fact.

Families have also long argued the unequal allocation of legal resources in custody death cases and believe there should be an automatic right to non means tested legal aid for families. “There is a lack of funds for family legal representation at Inquests whilst officers and NHS staff get full legal representation from the public purse – this is unbalanced”.

Want to help publicise the petition?
Download our guidance pack and banners here >